Youth Speaks! Rizal is an inspiration to our generation 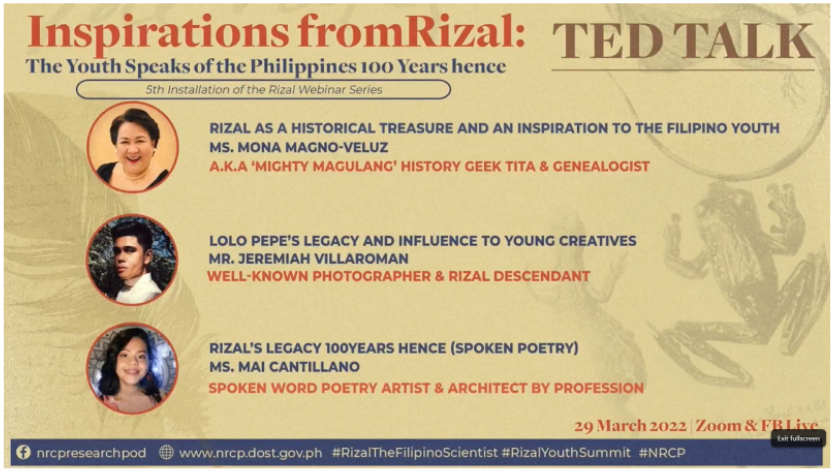 “The Youth is the hope of our future.”

A timeless quotation from our National hero, Dr. Jose Rizal, that even to our generation today, this still has an impact and relevance. The National Research Council of the Philippines of the Department of Science and Technology (DOST-NRCP) brought the last of their Rizal webinar series, where they gathered a viral sensation and Tiktok influencer, a fashion and photography editor and a descendant of our national hero, and a well-known spoken word poet-artist into a Ted-talk stirred webinar titled “Inspirations from Rizal: The Youth Speaks on the Philippines 100 years hence”.

This was a youth-oriented activity that was designed to be an active learning type of online event that discussed our national hero’s influence, especially on the youth. Indeed, participants felt the strength in their energy and dynamism while listening to evocative talks shared by speakers.

For Dr. Aimee Lynn Dupo, DOST-NRCP Member at Large, the webinar was a modern fulfillment to Rizal as a scientist who brought science closer to the people.

Dr. Rowena Cristina L. Guevara, undersecretary for Research and Development of the DOST, in her message, emphasized that those who shared during the webinar were the epitome of our national hero.

Guevara also stressed that we must continuously honor Rizal’s life by mirroring his nationalism, advocacy, and scientific works not only for ourselves but for the Filipino people. 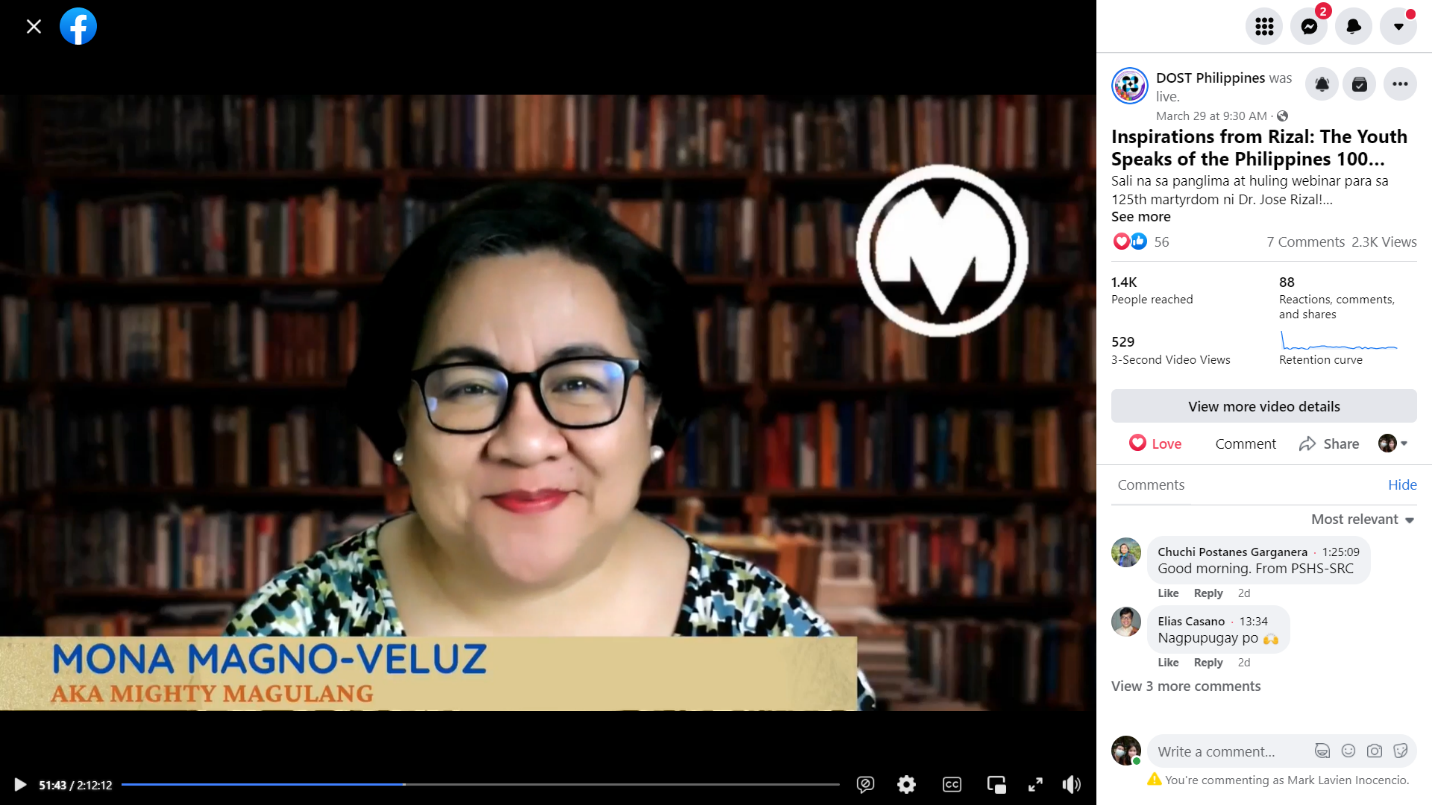 the relevance of Jose Rizal in today’s youth.

In her presentation, Tiktok influencer Mona Magno-Veluz, A.K.A. Mighty Magulang believes that though, many never had the pleasure of studying the life and works of Jose

Rizal, the youth today can rediscover the greatness of our national hero with fresh eyes by knowing the relevance of his life and works.

What keeps Veluz inspired beyond Rizal’s scientific and literary contribution, was that he was hardworking. She said that Rizal died at the very young age of 35 years old, and he could have not done all his accomplishment if he was not spending his days being productive. For her, Rizal knew that accomplishment and expertise came after work and perseverance.

She was also inspired that Rizal’s love for his family and he never abandoned the connection even when he was far away. Through this, she was inspired to tell the young generation to keep the connection with their families, particularly with the help of digital communication. 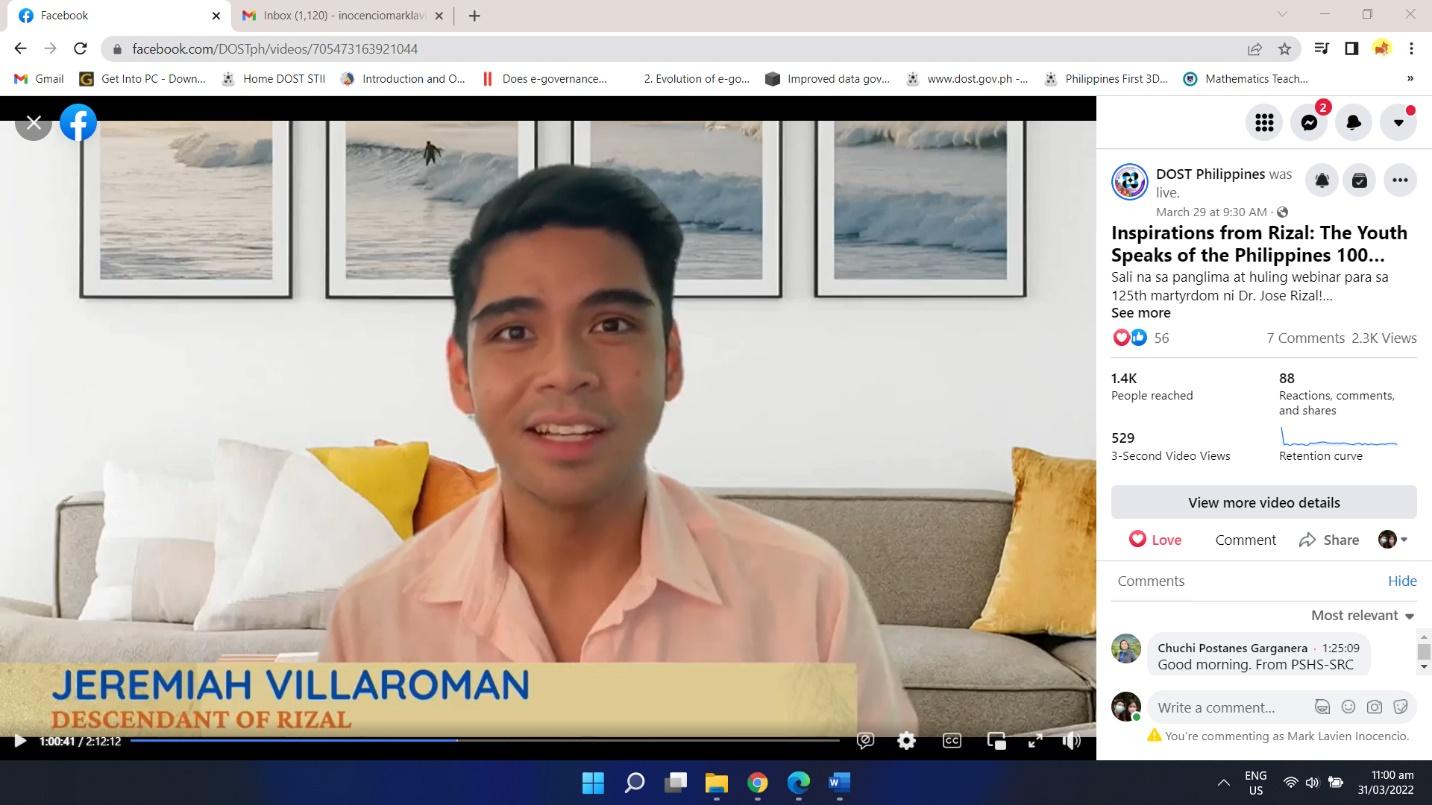 of his Lolo Jose and his influences in his career.

A millennial Rizal descendant, Jeremiah Villaroman sparked Rizal’s interest in arts and was influenced by his great grandfather. An editorial photographer by profession, Villaroman was inspired by Rizal’s desire to learn other masters outside the borders of the country.

He mentioned that Rizal wanted to share the knowledge that he gained from the masters of Europe with his fellow Filipinos. Learning and sharing information with others was a personal achievement for Villaroman and he makes sure that it makes the lives of people around him better.

Villaroman advised the audience to be like his “Lolo Jose” who did not keep the information of knowledge to himself and instead shared them with others to continue the legacy. 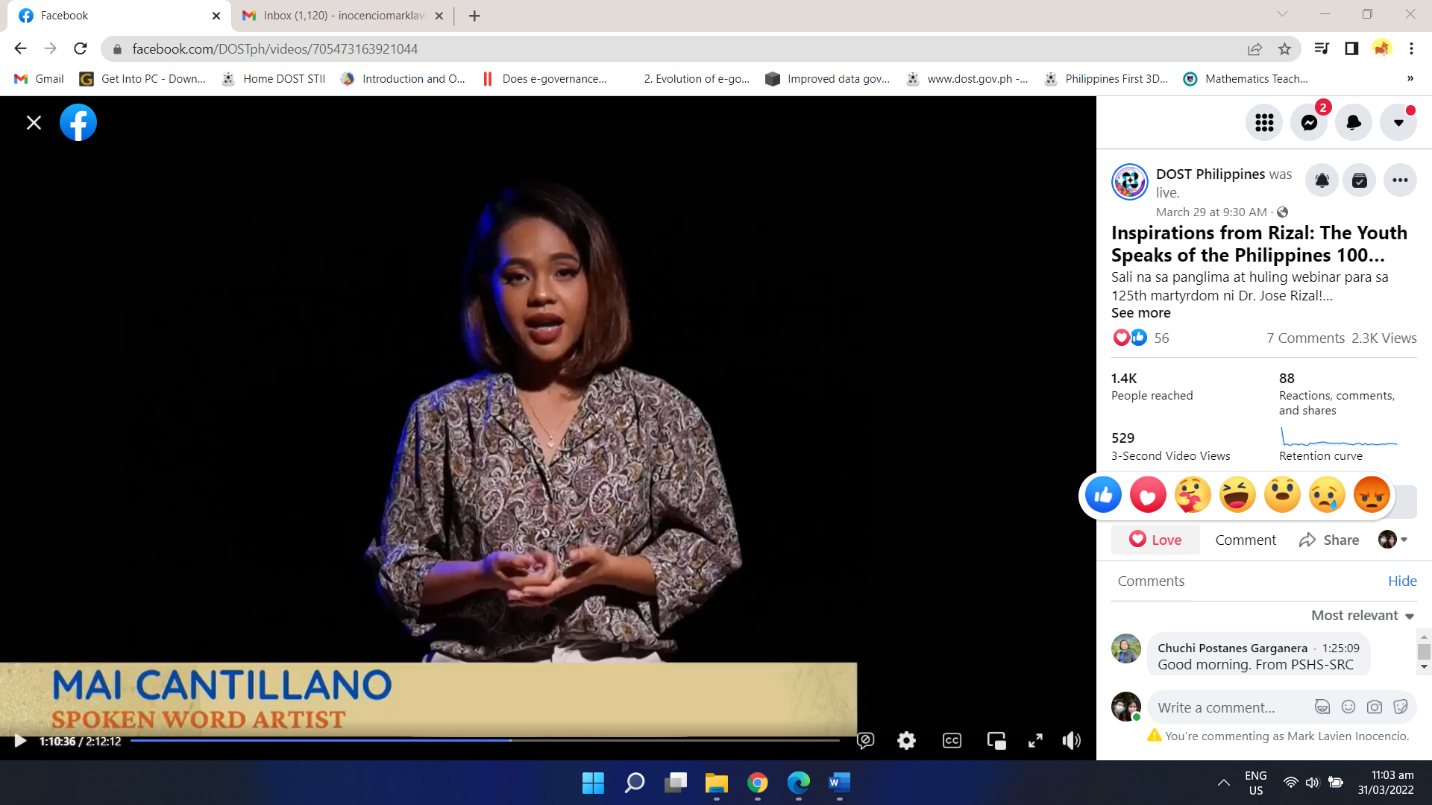 For the last Ted-talk performer, spoken word artist Mai Cantillano narrated creatively the last moment Rizal experienced on the day of his execution while relating her current experience by recalling the memory of the national hero.

Cantillano also voiced in powerful words that we are taking refuge in the shadow created for us by our national hero. Sowing the seeds in the chosen land and later sprout to our hearts, when needed.

Let’s hear it from our Youth! 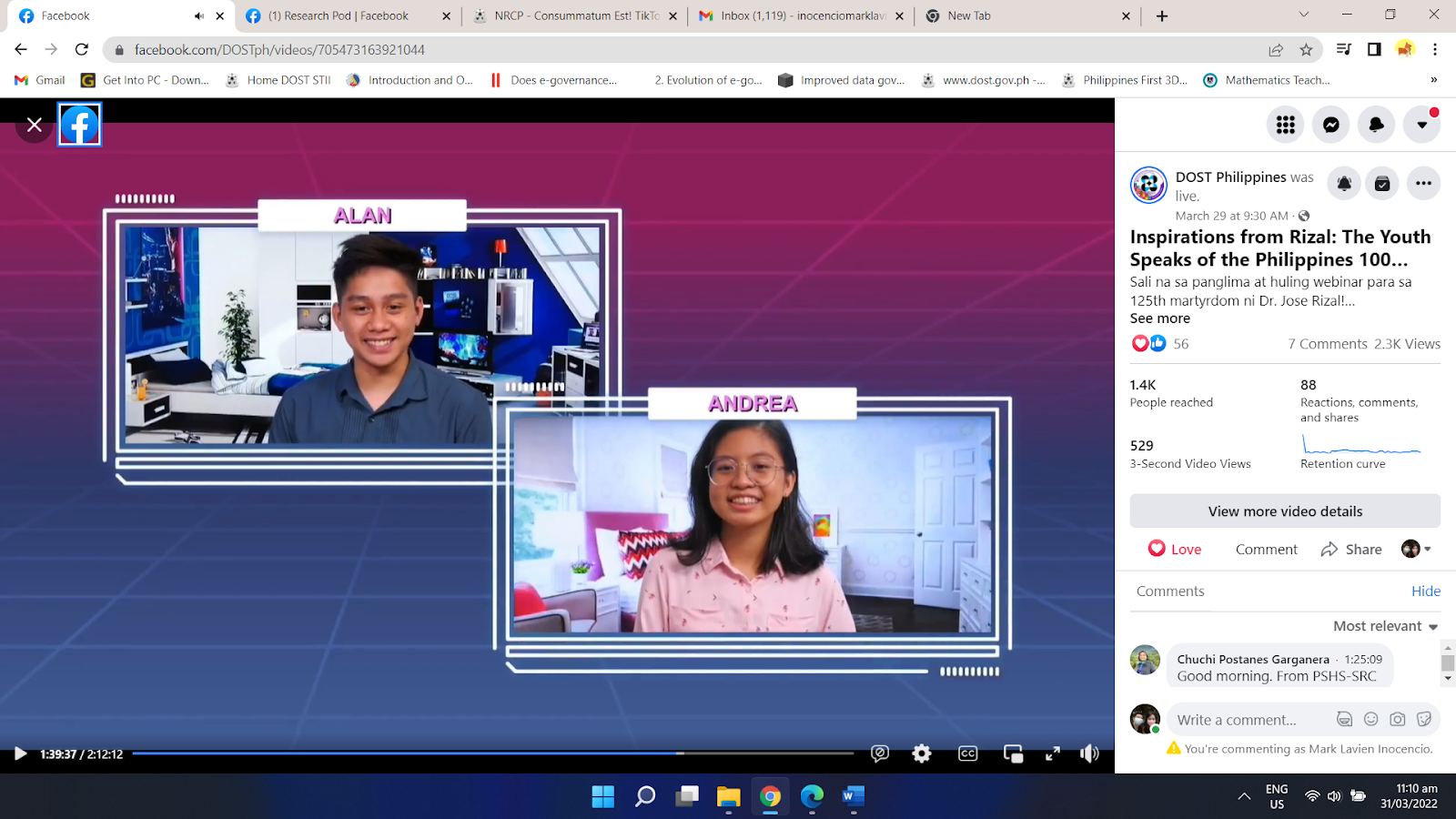 Two (2) SEI Scholars, Andrea Canullas from the Philippine Normal University and Allan Jade de Leon from the Technological University of the Philippines while engaged in a discussion about S&T, climate change, pandemics, and education and Jose Rizal’s significance.

Moreover, Andrea Mae Canullas and Alan Jade De Leon, both DOST-SEI scholars represented the youth speaks portion. For them, the spirit and memories of our national hero are still very much alive. And if only Rizal was alive today, he would be amazed at the development and advancement in science and technology today.

Additionally, Rizal’s skills and talents are suitable for any season or era. He would be an inspiration to every Filipino, especially the youth. Probably, Rizal would lead in the intensification of progress in the field of science.

One by one, Canullas and De Leon also revived the character of Jose Rizal in the fields of education, environment, and engineering. They also mentioned that if Rizal was alive today in the time of the pandemic, he would take the lead in defeating the virus as he was well trained as a medical professional. They also mentioned that Rizal, as a writer, would probably be fighting fake news and promoting responsible journalism today. 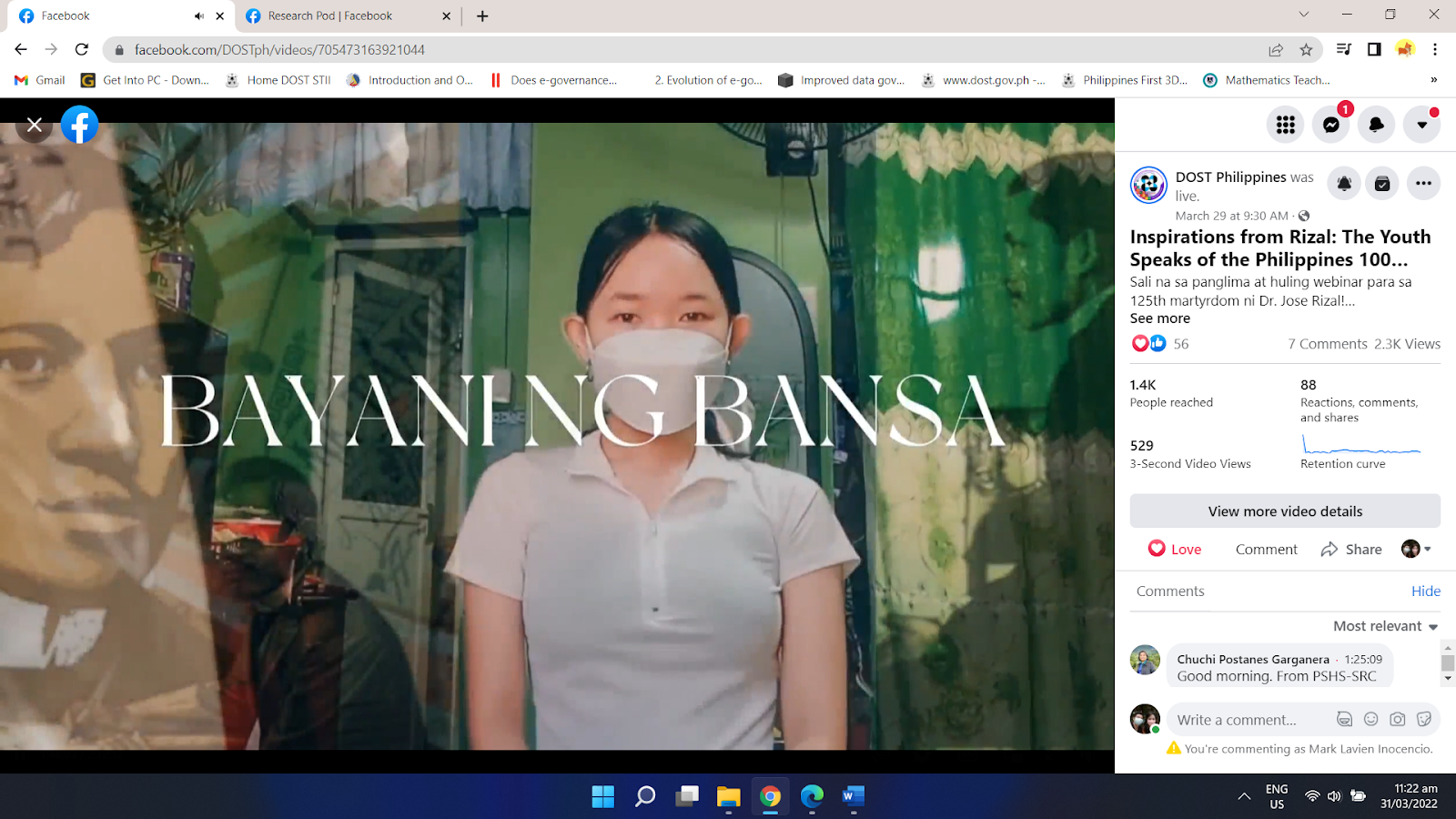 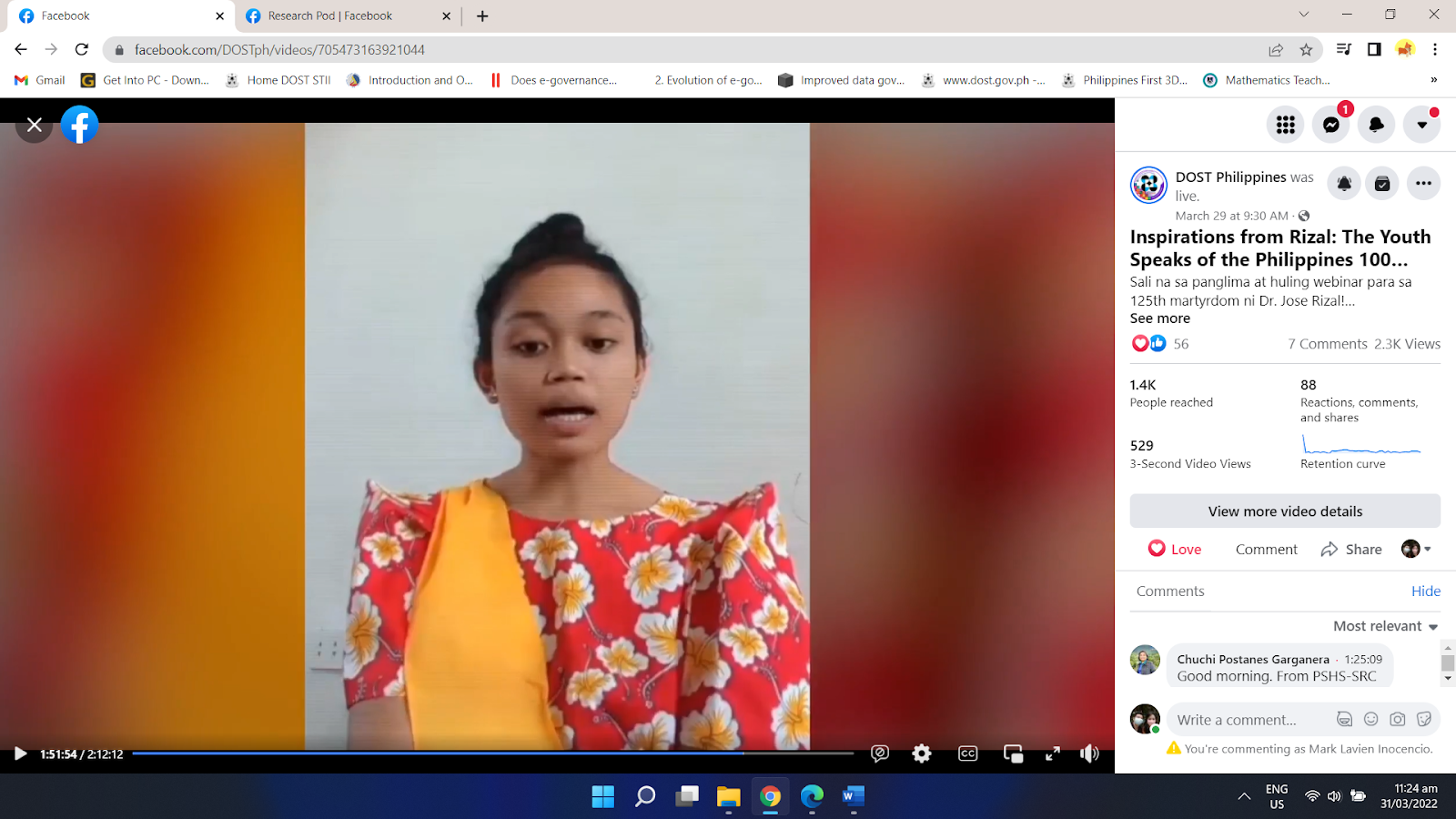 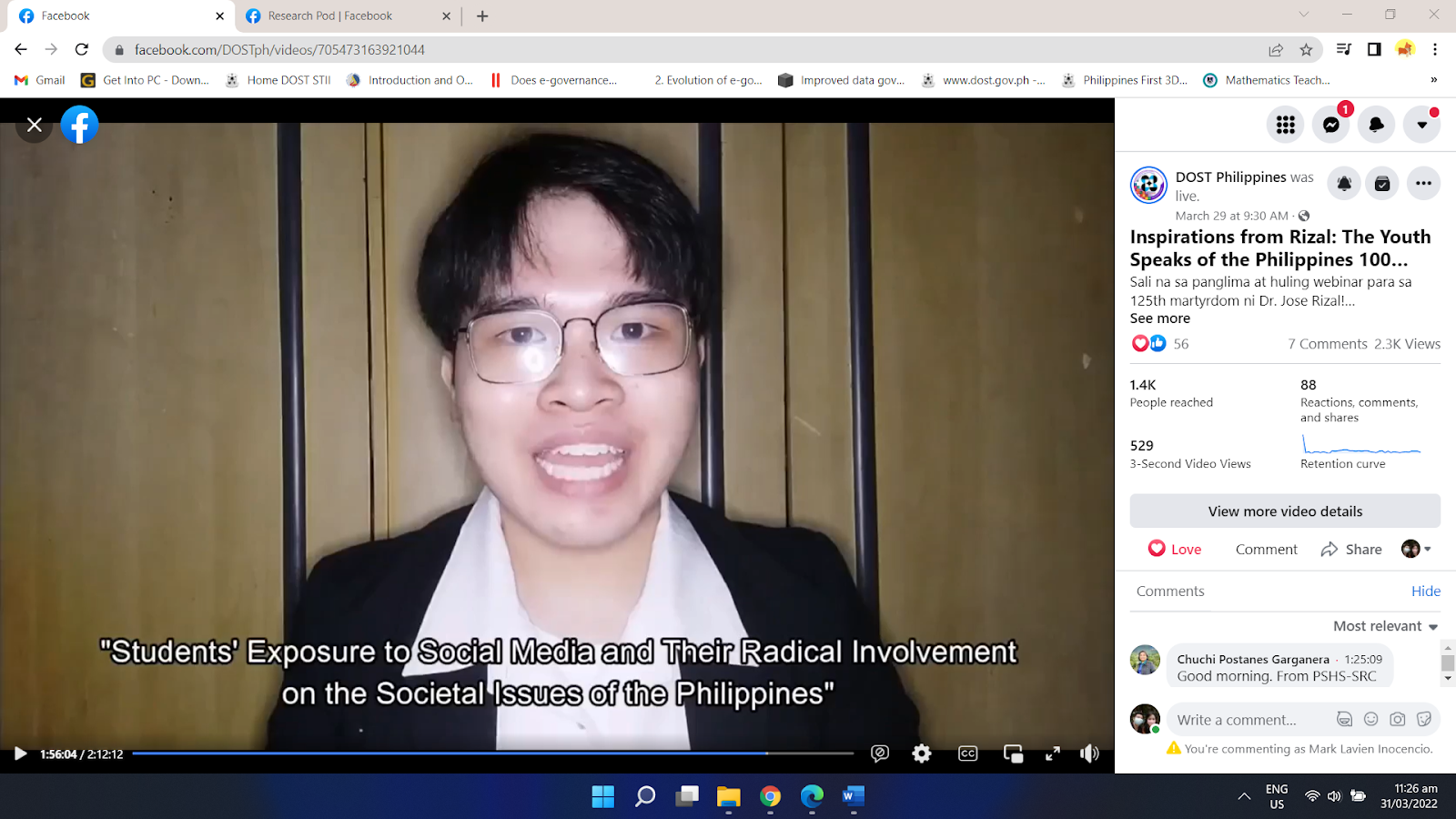 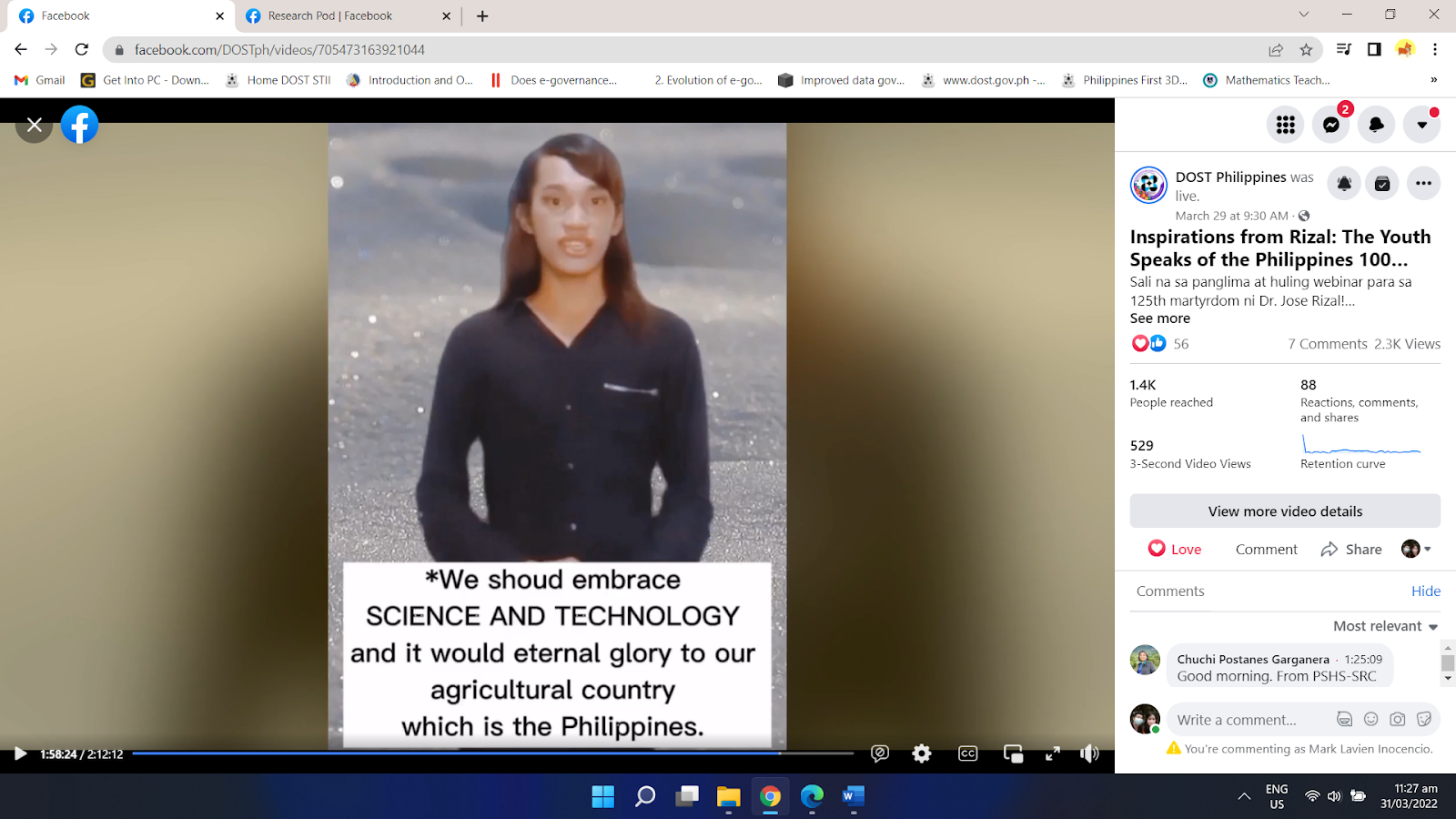 Some sample of chosen entries for the Rizal Video Campaigns

Lastly, a video of pledges and messages of selected entries dedicated to highlight the contributions and ideas of Dr. Rizal to science, technology, and innovation of the future. 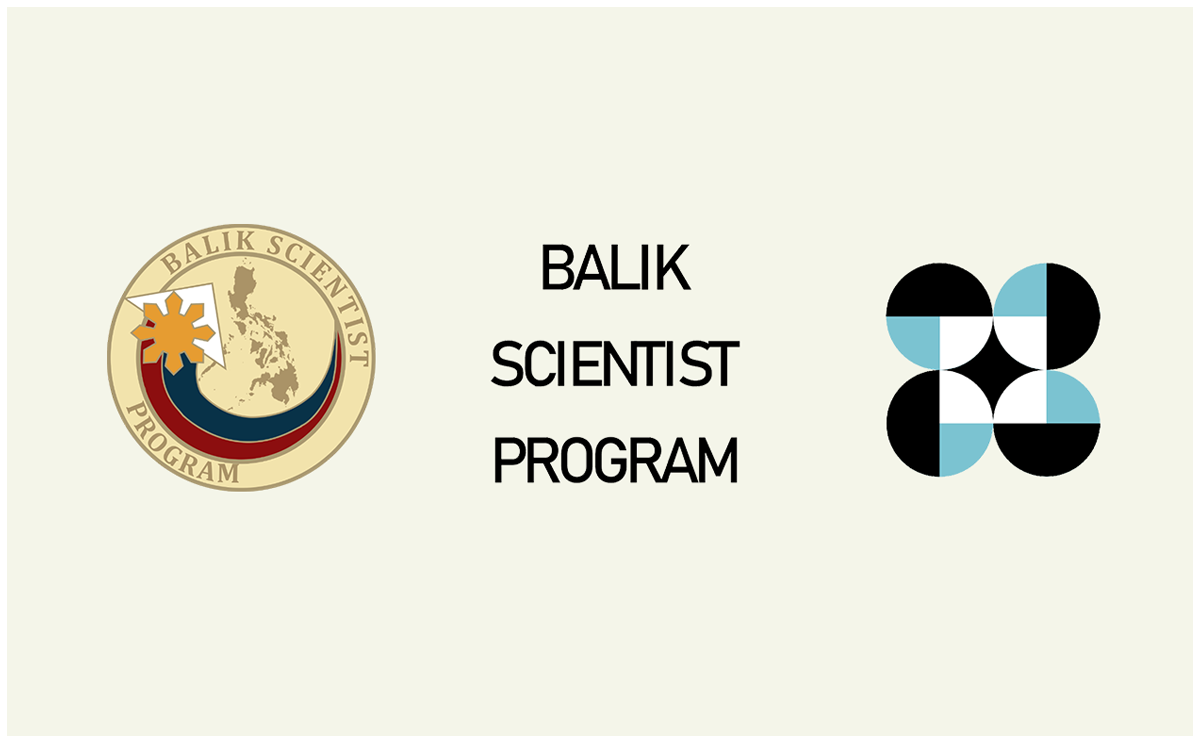